I expected to get roasted by my liberal friend and his liberal friends on a recent comment I made. I argued for the validity of the Israeli claim to Jerusalem. Instead I got lotsa likes. So I thought maybe it’d be worth sharing what I said. 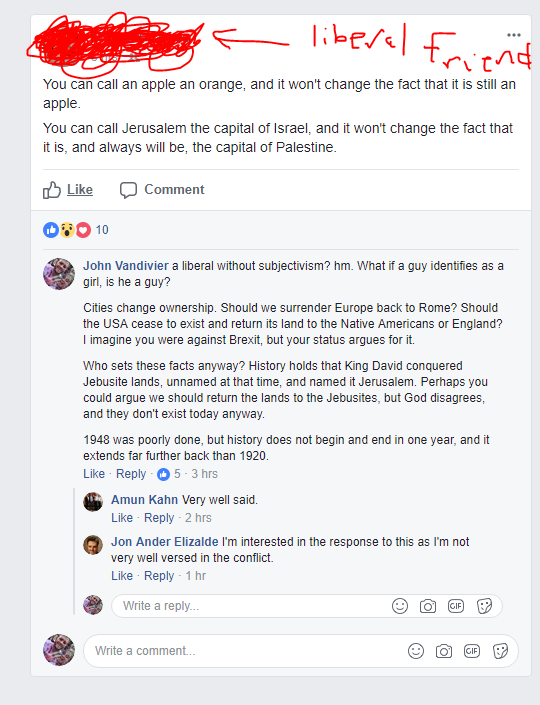 1948 is a reference to the formation of the modern state of Israel. Tons of things happened that year including their declaration of independence and the Arab-Palestinian War. The partition plan had been passed in November 1947 but it was still being implemented revised. That is to say the War was ongoing and the 1949 Armistice had yet to obtain. The Armistice set the actual geographic boundary of Israel, for a time, rather than the partition plan, afaik. It was called the Green Line.

1920 is a reference to the Mandate of Palestine. This mandate came from England, who controlled the land after WWI, and which more or less made Palestine into a state-like thing, a geopolitical entity. Of course the status in the image above would need to revert control of the land to those who had it prior to England, and those prior to them, and so on, until we come to the original owners. Instead, the pro-Palestine position, generally associated with the liberal pro-Islam view and opposed to the Christian conservative view, somehow want to stop with Palestine. It’s not entirely illogical. The partition plan was poorly handled and resulted in excessive bloodshed, but the Palestinian view misses that the Mandate wasn’t any better! The way Palestine ended was neither more legitimate nor less bloody than the way it began.

Today Israel is an exceptionally productive nation and a stabilizing force in an otherwise chaotic region. They are an ally to the US at the political level and to Christianity at the socio-cultural level. They represent the restoration of the original ownership of that land. I see no reason to give the illegitimate and violent Palestinian government anything. The Palestinian people are a culture unto themselves, but is that enough to justify an autonomous state? The US has many different cultures and one state. Many geopolitical states around the world have several distinct cultures within them. In fact, I’m scratching my head for one that doesn’t. I think the Palestinians can maintain their culture while being integrated into some other state, but I’m open to the alternative. In fact, I’m generally in support of political devolution, ie Brexit, for any reason. More states means more political competition and I see this as a social good. Indeed, perfect state devolution would be every man as his own government, a voluntary society. That’s an admirable, though short-term infeasible goal.

I’d be fine with a Palestinian state if they can come to a voluntary agreement about the location, but using the UN as a political tool to steal from Israel is not a legitimate approach. Sell them a chunk of Russia or China and let them migrate. I don’t mean to dismiss them in that way: I’d love to be able to buy a chunk of Russia or China and have a country of my own. The physical distance between Israel and a Palestine thus crafted would have the added benefit of much less ongoing bloodshed. It doesn’t seem likely Palestinians would massively migrate away, but that would be a deal I’d strike if they were willing. It’s not entirely without precedent either. After all, Israel exists in large part due to a massive social migration of Jews to a physical location. They had been scattered about Europe for centuries, since the Diaspora, and they coordinated the negation of the Diaspora, the Aliyah.