God’s Not Dead 2 is a Christian-themed movie that follows a court case where a teacher is accused of violating the rights of students by discussing Jesus in a classroom. This article uses the movie as a case study in expert bias and signal failure.

Rotten Tomatoes is a well known movie rating website. It provides signals on the quality of a given movie to a signal consumer who is evaluating the potential utilitarian benefits of movie consumption. As of the time of writing, God’s Not Dead received an 11% on the Tomatometer, although the audience score was 61%. As for myself, I would give it a 4.2/5. 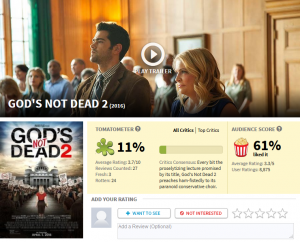 So we have a case of expert bias and signal failure: