This article will cover 3 easy methods of activism. They can be used for political purposes, marketing, teaching and anything else that involves calling people to action.

The 3 methods are online activism, activism through guest calling radio shows and conversation tips for personal conversations, which is sometimes called “canvassing.”

Tom Woods is a great writer and teacher in the liberty movement. I totally take credit for David Friedman’s appearance on the Tom Woods radio show. Screenshot from comments section of The Tom Woods Show:

In another case, he uploaded a radio episode to YouTube after I made the request. See the pictures below: 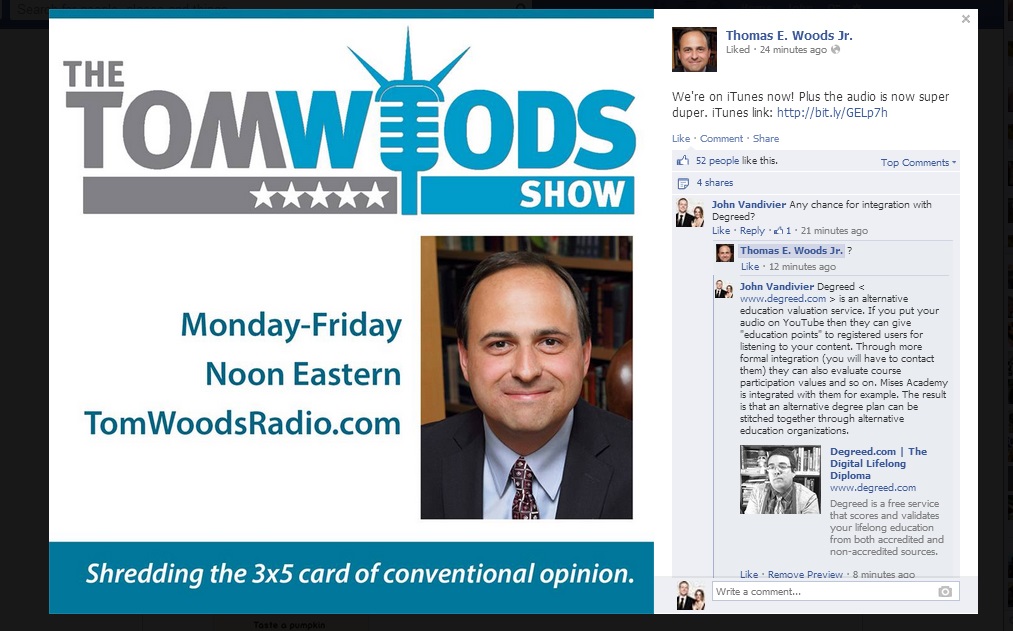 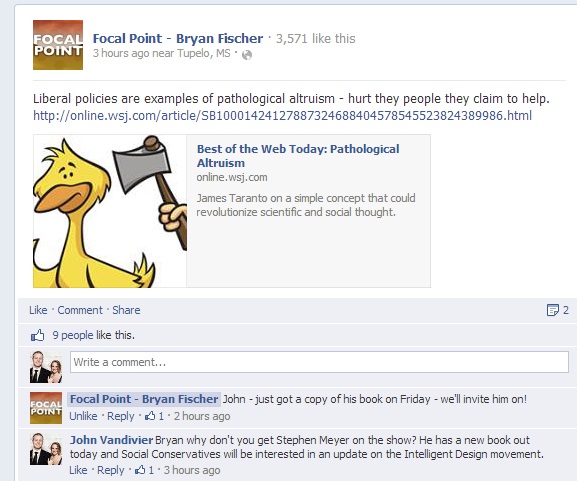 As you can see I simply took a few seconds out of my day to make a call to action in the comments section of things they posted. Wording is key here. Do not be aggressive and find people to pitch to where it will result in a mutual benefit. Tom Woods promotes alternative education so I pitched him on Degreed. Bryan Fischer is a social conservative leader so I pitched him on ID.

This kind of online activism works with all manner of online media including forums, Reddit, blogs and so on, but I have noticed that it works particularly well with social media such as Facebook, and to a lesser degree, Twitter and YouTube.

Calling In To Radio Shows

Speaking of Brian Fischer, calling into radio shows is a great method of activism as well. In all these kinds of activism be sure to look for key players to pitch to. If you convince a nobody that you have a great idea, you have just convinced nobody that you have a great idea. One problem with the radio method is that radio shows worth calling usually have far too many calls to squeeze in to the limited call taking time they allot. Use this method if you have a show you like and would listen to anyway. That creates a twofold benefit. First, if you like the material the show usually puts out it’s more likely that the usual audience of the show will be somewhat like you and therefore may be sympathetic to your ideas. Secondly, if you call and don’t get in you would have listened anyway so it’s not such a waste of time.

Word of Mouth Activism and Canvassing

First try to gauge the other person’s sensitivity level by asking a general question related to your specific call to action. For example you might ask, “What do you think about politics?” If the answer is, “I don’t like to talk about that” then take that into consideration and end the conversation quickly. You can still put in a related call to action as you wrap up. You might say, “Oh ya I understand. It is a sensitive topic isn’t it? I just bring it up because I was reading [insert book title here] yesterday and I thought it was pretty interesting. You should check it out you might be surprised.”

If the person is comfortable talking more directly then don’t shy away from getting to your point, but try not to be aggressive either. “So do you vote Democrat? Why…?” Be open minded and actually listen to what they have to say. Make your call to action and get a definitive answer. Turning questions into a simple yes or no makes things simpler many times. You might ask, “So will you meet me there at 6 pm next Monday?”

Lastly, be sure never to set yourself up as the final authority or you will have your bluff called. Rather, try to talk someone else up and you will be recognized as someone who thinks highly of others rather than yourself. Additionally, talking other people up can be used as a tactic to motivate action. You might say, “I know a good deal about this product but the guy I work with in the company actually invented our product. He’s wicked smart and surprisingly nice. You should come meet him next week. He can probably tell you a few interesting details I missed.”

I would also note that calling people to commit an easy action is usually more likely to be effective than calling them to conduct a difficult action. Getting an email is usually easier than making a sale and so on.

I hope this helps!