Computer World and Ars Technica both recently ran stories based on a recent Mt Gox official statement. The statement was regarding a series of DDoS attacks which Mt Gox has been undergoing as of late. The statement significantly acknowledged that Mt Gox had been planning to support litecoin trade and such plans had been postponed due to the attention shift toward security interests.

Litecoin is a cryptocurrency based on an altered bitcoin protocol with significant improvements adding real value. The mining protocol is based on scrypt rather than SHA256. Scrypt is best mined with GPU power which is consumer-grade. This makes litecoin a more “democratic” currency, and allows it to fulfill the cryptocurrency’s necessary trait of a widely distributed network, at least for the short and mid terms, better than bitcoin.

In this article I go over some other things which give litecoin intrinsic value and even a competitive advantage. Here is a chart graphing Litecoin search interest by Google: 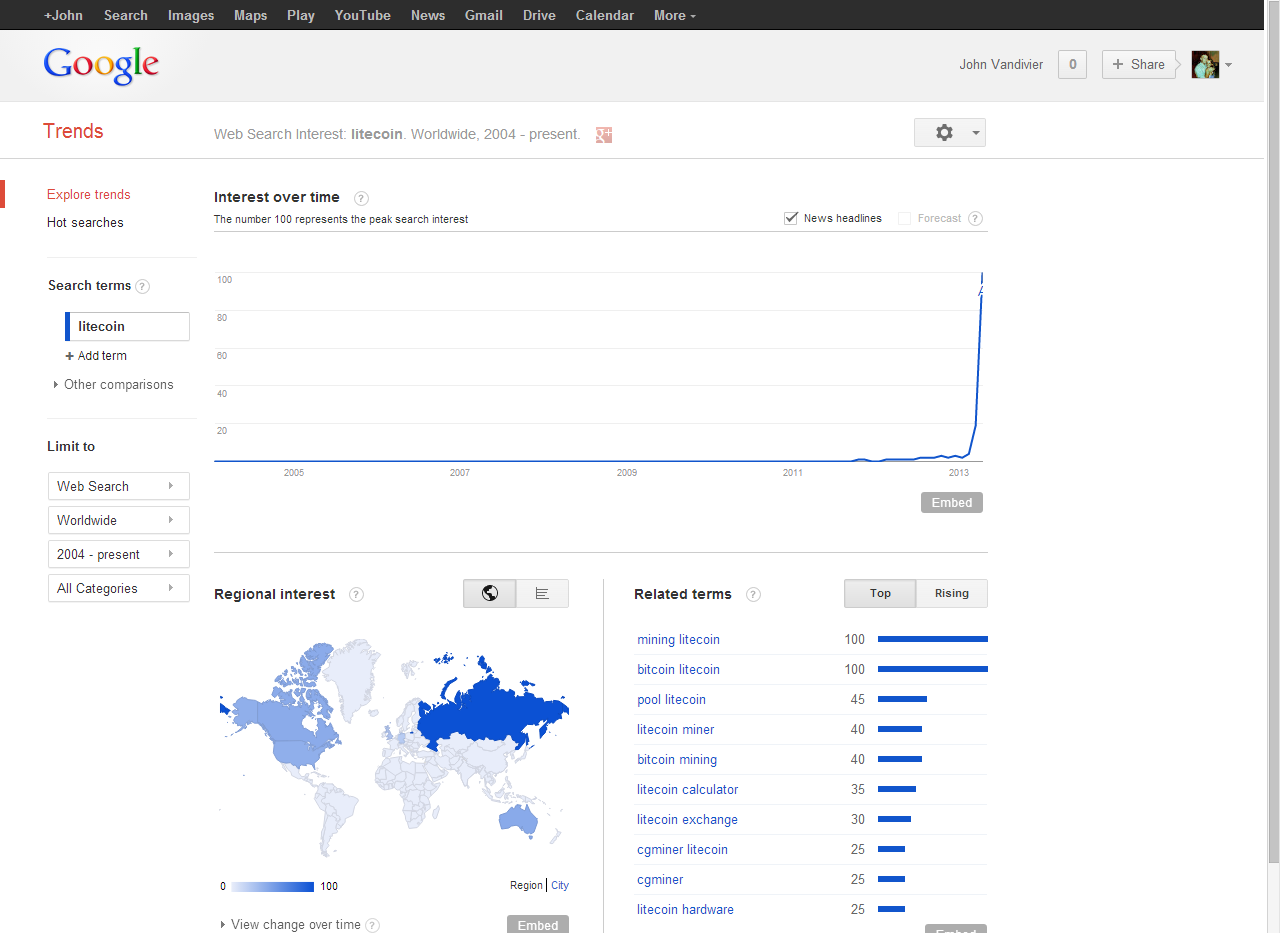 Interesting that so many Russians are searching ltc 😉

In the long run by the quantity theory of money, assuming litecoin and bitcoin can function equally well, litecoin should have a value of .25BTC. This is because there will be a total of 4 times as many litecoins ever produced as bitcoins ever produced. However in the short to mid-term, litcoin will be significantly more valuable by the same quantity analysis because currently the ratio is closer to 17LTC for each 11BTC and the equalization process takes the course of several years as it is determined by each coin mining its maximum number of coins, which takes many years.

This would yield a short term price of 11BTC/17LTC which very slowly approaches .25BTC/LTC over many years. However this does not account for the non-quantitative qualities. As I have previously argued litecoin is fundamentally superior to bitcoin. How much superior? That is the question. I have no idea. Perhaps that is a topic for another article.

However, presuming LTC>BTC this implies that BTC will be valued at LTC>BTC>0. From a statistically ignorant point of view the 50% mark is the best choice. Therefore I will presume that the intrinsic value of bitcoin is .5 the intrinsic value of litecoin. Note that I am not talking about individual coins here, but rather the entire system.

We multiply the expected intrinsic value of the whole litecoin system (2xBTC) by the expected quantity value per coin and we find the expected value per litecoin is 22BTC/17LTC slowly approaching .5BTC/LTC. There is one other problem with this analysis: Economic infrastructure. The litecoin economic infrastructure is a joke compared to the BTC infrastructure and we all know how hard it is to grow that BTC infrastructure. However! Litecoin processing is almost identical to bitcoin processing. What this means is that given a particular business has decided to use bitcoin it should be very easy to convince them to use litecoin! In fact, litecoin and bitcoin fluidly and quickly exchange with one another. I expect in the mid-term the LTC infrastructure will become insignificantly different from that of BTC, but that is not in the short term, rendering the short-term valuation incorrect.

What is the market value now? Yesterday it was .022LTC/BTC. Today it is .027LTC/BTC. Let’s say LTC only ever grows to .5BTC/LTC and never gets that mid-term bump we expect by the quantity theory. This would still be over a 15xROI!! That’s 15000%!

I expect the Mt Gox trading of litecoin will begin this trend and I expect the flood of ASICs in BTC mining this summer will supplement this trend. To be more specific, I expect Mt Gox to begin LTC trade and a significant number of ASICs to be shipped by August 2013 resulting in an exchange rate at least .15BTC/LTC by August 31.

Other people are also calling for the litecoin jump:

His expectation is USD which is not entirely consistent with mine. Right now 1LTC = 3.8 USD so he is basically expecting a little over 600% ROI from fiat. My prediction would be that as LTC rises relative to BTC, BTC is still rising relative to fiat. I have predicted elsewhere that by December we will have seen a $264 BTC. That would mean about 176% of today’s value (range today, April 25, 140-160). So in fiat I suppose I am predicting about 176%(.15/.022)= 1200% ROI, or about double what this other guy is expecting. At least we are in the same direction, but I don’t hear alot of numbers in his analysis so I think mine’s a little better 😉

People called me crazy when I called BTC. Now I am calling LTC. Come get your money.