Preventing illegals from entering the US is a single concern, and I think it is a valid one. There is an entirely different matter which is whether or not we should deport the illegals which have already arrived. This article argues that we shouldn’t deport illegal immigrants for at least three reasons. First, illegals produce more economic benefit than they cost. Second, deportation itself is massively costly. Finally, illegal immigration is a means by which the private sector of the economy can grow at a faster rate compared to the public sector.

Their analysis indicates a net cost of about $100 billion to the public sector. This is true, but it ignores the benefits illegals bring to the private sector. UCLA research indicates that consumption from illegal immigration amounts to $150 billion annually. Admittedly, UCLA likely has a bias in favor of additional immigration, but I can’t find any lower numbers. Cato allegedly valued the number up to $250 billion.

So looking only at taxes, illegals cost more than they get in benefits, but that’s not the whole picture. Including benefits to the private sector, illegals contribute net about $50 billion or perhaps more. This result is consistent with basic supply and demand which tells us that more consumers and workers benefits the overall economy, lowering prices and creating jobs. 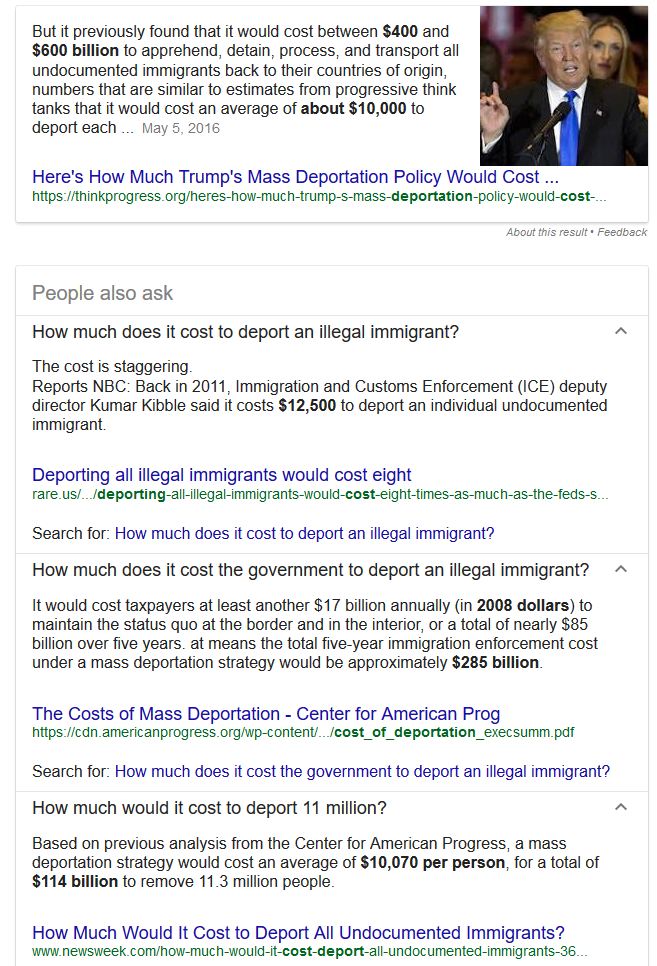 A Google search for “cost of deportation” at 7:30 PM on 2/12/17 produced the captured image at the right. Click it to enlarge it. The lowest figure given for a mass deportation effort is about $114 billion for the deportation of 11.3 million illegal immigrants. Here’s a few key points:

If you take away illegal immigration then the public sector has a bigger piece of the pie. I don’t know any conservative who likes that idea. We want government to be smaller and the market to be bigger, right? The more of the economy that government controls, the idea goes, the slower the whole economy will grow over time. Illegals actually help out with that.

IV. What About Future Illegal Immigration?

There are at least three things to consider when it comes to policy-making. The first is the economic impact, and I think I’ve shown that illegal immigration is a net positive from that point of view. The second part is the moral question. We don’t want to be passing immoral laws.

You know what else is immoral? Putting your family into danger of poverty or harm from vicious Mexican drug cartels. One thing I always like to do is to put myself in the other person’s shoes. If I was in Mexico I would definitely try to come to the US, and I wouldn’t wait on a 10 year waiting list to do it.

So we can kind of see both sides. I say there’s an easy way to get the best of both worlds: Make legal immigration easier. Maybe even go for unrestricted immigration. Then it’s not immoral to have 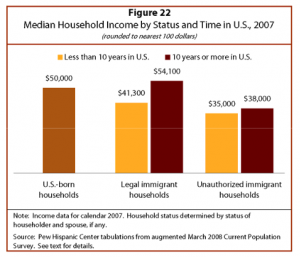 illegal immigration because there’s no such thing. As many Americans point out, that’s how it used to be back in American history. We are a country descended from immigrants. If you want to keep some restrictions then on the one hand I don’t see any evidence that you have a good idea, but on the other hand I’ll compromise with you because it’s better than what we have. I wouldn’t wait on a 10 year list but maybe a 2 or 3 year list if I wasn’t in extreme or immediate danger. At the same time, if I was in immediate or extreme danger, I still wouldn’t wait that long. We as Americans are basically forcing some people into harm’s way with even a small wait list to get in.

I did say there are at least three things to consider. The third things is the size of government control. In general, we as conservatives should be supporting smaller government, less taxes, more free markets, and more freedom. This is totally consistent with unrestricted immigration, not with heavily restricted immigration. So overall, I say let the immigrants in. Illegal immigrants already give us an economic benefit, but legal immigrants give us an even larger benefit. Why not have more of both?