This post was inspired by and will include an excellent discussion on the Bitcoin channel for Reddit. This post will be an attempt to calculate how many people use Bitcoin, what percent of the world that is, and how that number compares to numbers of users of other currencies such as the Euro, dollar, yen, etc.

Here is the screenshot of the Reddit discussion including the initial topic/question and the response I found interesting: 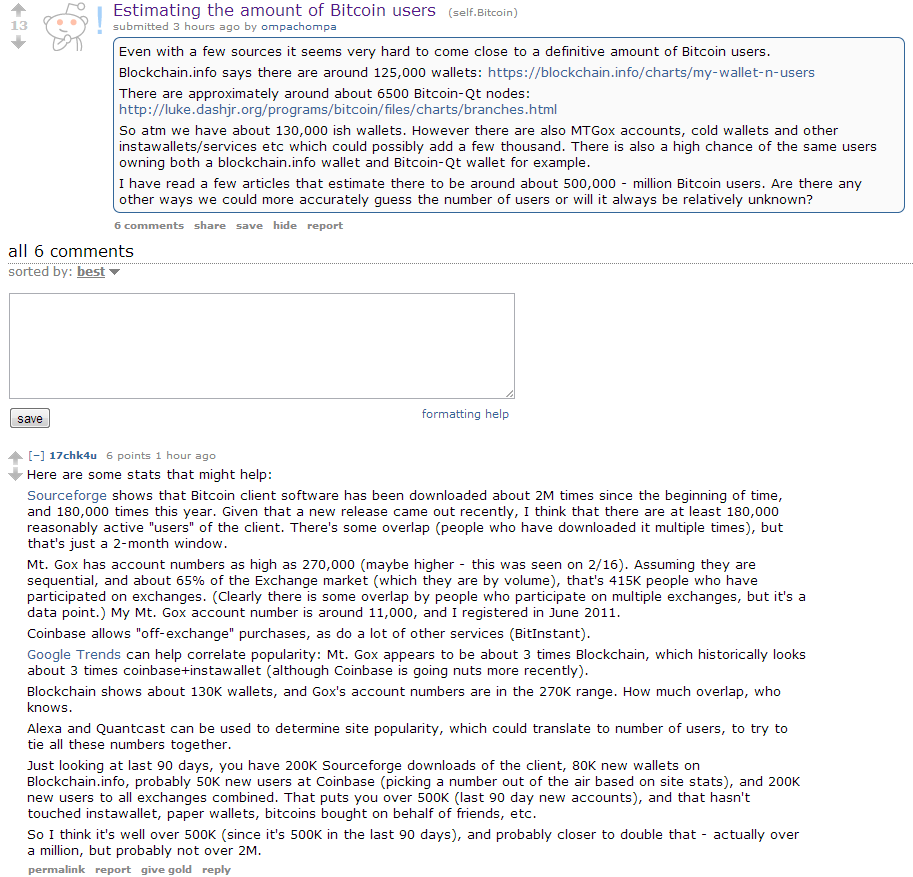 So let’s get down to business. What are the statements made, are they accurate, and how many Bitcoiners, which I will abbreviate as BCRs from time to time, do they imply?

First, however, let’s also be clear to define what a “Bitcoin User” or “Bicoiner” is. I would say anyone who possesses a Bitcoin is a Bitcoin User, regardless of whether they “use” that coin for conducting transactions or not. Personally I own many Bitcoins but I do not spend them because I see them as a high-potential, albeit with high risk, investments. I also see them as well as a good way to preserve capital by evading the inflation inherent in my home country’s USD. I “use” bitcoins for all of these things, intentionally or not, simply by owning them.

1) 125000 Blockchain.info wallets – Bitcoiners must have wallets, but a single Bitcoiner may possess several wallets. I have generated a few Blockchain wallets personally. It’s a statistically weak assumption, but let’s assume that the average Blockchain Bitcoiner has no more than 5 wallets. What this would indicate is that at least 25,000 Bitcoiners exist, but Blockchain.info is not even close to the only wallet source. We should also include instawallet, Mt Gox, and Coinbase. Other sources will be relatively insignificant.

2) 6500 Bitcoin-qt Nodes – A node indicates an active participant in the Bitcoin network. Usually these are highly interested parties that are very involved in the Bitcoin economy, however they also represent only a franction of the Bitcoin community. I am an active Bitcoin user but I do not actively use the Bitcoin client and therefore my PC does not register as a node. Like many, I prefer to use online wallets which are held safe by other nodes. This statistic indicates that there were at least 6500 highly interested and active Bitcoiners at at that particular point in time. I checked and the number is still approximately accurate. It may be weakly assumed that this number is not terribly volatile as people usually will leave their computers running even when not around.

3) Bitcoin Client Downloads – 2M total and 180,000 since the start of the year. The 2M figure is useless because it includes old client versions and people who have come into and later abandoned the community. The 180,000 figure is useful because every current node needs a current client. As 17chk4u, the commentor, notes, this figure is a proxy, or approximate measurement, of the number of reasonably active users of the client. It does need to be deflated for multiple downloads, but I would say the average person would get it right the first time, especially considering that Bitcoiners are nerds. Let’s say that 1 in 5 Bitcoiners has to download the client a second time for some reason. This means 180k downloads implies (180/5)*4 = 144k active client users. However, as mentioned in the previous node analysis, these people are only a portion of the Bitcoin community. If we assume that 1 in 5 Bitcoiners is a client user then we end up with 144*5 = an estimate of 720k Bitcoiners. So I would say this number implies as few as 140k BCRs or as many as 720 BCRs. Let’s average those and call it an estimated (140+720)/2 = 430 BCRs.

4) 270,000 Mt Gox Accounts – As the commentor notes, Mt Gox does about 65% of exchange trade, not including off-exchange trades, by volume. If we assume that trade by volume is relatively constant per BCR on average for each exchange then we will see that 270k Gox accounts implies 415k total accounts, however some people will be on multiple exchanges. Additionally, many of these accounts may be abandoned. I would say this number implies 240k-350 BCRs that use exchanges. Let’s average it and call it 295k BCRs.

5) Instawallet – As of this writing, according to the instawallet homepage, about 3.4 M instawallets have been generated:

I have generated about 10 myself. Using this deflationary measure we will find about 340k BCRs. However this is a statistically unreliable number because it would be very easy for me to generate 100 wallets on there for no apparent reason.

6) Coinbase. The https://coinbase.com/about page claims Coinbase has 44,000 users. I have no idea if that number is current or not. The commentor guessed about 50,000 judging from site traffic. I will therefore use 46,000, assuming that the number is somewhere in between, but closer to Coinbase’s number.

It is important to note that the network size analysis and the account volume analysis yield results which reinforce the validity of each other strikingly. It appears that there is some good evidence to think that there are about 450k current Bitcoiners. Call it 400-500k BCRs if you would like a confidence interval.

How does this compare to the world?

Since it is difficult to discern how many people use a particular currency, let’s assume that ever member of the population of a country uses that country’s currency, no more and no less. Let’s also announce the new nation Bitcoinia, or perhaps Ancapistan or Libertopia if you prefer, which has a population equal to the number of people who use Bitcoins, estimated at 450k.

Bitcoinia would be the 165th largest country in the world, beating out Malta, but being just topped by Luxembourg.
Since there are 196 countries in the world, that would also make Bitcoinia the 30th smallest country.

It gets worse. While most sites recognize 196 countries, the CIA world factbook nontheless collects data on 229 countries, including some non-sovereign territories and colonies, as well as some countries which have not been formally recognized by the EU, US or other nations. Not in terms of the population of Bitcoinia, but in terms of its GDP, if the market value of all bitcoins is equal to that GDP, we would have the 215th smallest GDP, making Bitcoinia a weaker economy than the economies of several countries which do not even officially exist yet.

1 thought on “How Popular is Bitcoin? How Big is the Bitcoin Economy?”