This article will argue that it is possible the government shutdown was actually good for the job market.

The October job rally could easily be chalked up to a fluke if it weren’t so consistent with long-term trend data and economic theory which supports the idea that a government shutdown is good for the economy. Personally, I had previously expected that a theoretical government shutdown would have to last a month or longer for these theoretical beneficial effects to even begin to set in, but apparently this is not the case. Take a look at the trend data chart below then we will discuss some theory: 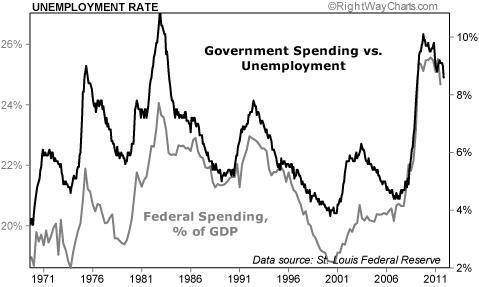 The theoretical idea here is simple: Government does things less efficiently than the private sector. This is just another way of looking at that same simple idea. What these statistics show is that over time the unemployment rate moves with government spending as a % of GDP. Strictly speaking as a statistician, this only establishes correlation rather than causality, but let’s take a further look.

It could be the case that the two factors are causally unrelated, spuriously related, or one causes the other. It’s hard to see which factor occurs first, and I think it might vary at times, but take a look right about 1976 and you can see that federal spending there is the first effect. This supports the idea that spending comes first. Let’s consider what usually happens under an increase in government spending. It negatively affects the private sector in two ways. On the one hand taxes, fees and whatever else the government uses to accrue revenue is a direct leech on the private sector, but not so fast! Sometimes the government spends money it doesn’t take from the private sector directly. It can also print money and accrue national debt, using money from other nations to pay. In both of these cases the national currency is devalued which still involves indirectly damaging the private sector.

In all these ways the government spending damages basic supply and demand. When government doesn’t spend money it still creates a similar effect simply through regulating industry. The government doesn’t have to crowd out business to hurt a business, it can simply tell the business that it has to do things a certain more expensive way and the industry will have a similar net effect, that effect being an increase to consumer prices, reduced industry revenues, increased unemployment and so forth.

Jobs are an input into business production. Any time you hurt business you hurt jobs. This damage to jobs can occur one of three ways. It can result in decreased wages, decreased employment or a mix. It is usually a mix. So in free market economic theory, when a government does pretty much anything it comes at a cost to jobs, either in the form of decreased wages or decreased employment or a mix. The government shutdown resulting in an unexpected increase to jobs can be seen to confirm this. While in theory it’s possible, in reality the government almost never creates jobs on net. The government obviously creates jobs, but the less obvious fact is that if those jobs didn’t exist there would be a larger number of jobs in the private sector to make up for it.