Beer is somewhere between cool and ice cold. At least is should be or you shouldn’t drink it. This article presents no original research, but instead it contains what I found to be an interesting discussion on the Laissez Faire Capitalism Facebook page.

For a more academic read on the history of beer and alcohol in the US, check out The Alcoholic Republic. Spoiler: Cider is manlier than you think.

The conversation below began with Laissez Faire Capitalism having posted this following meme. 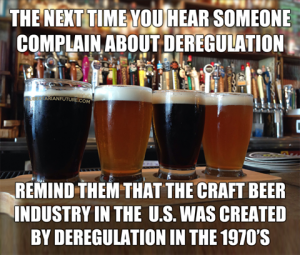 Jon Humerick
This is 100% false. Don’t post about industries you know nothing about. The craft beer industry is not a result of deregulation, and quite frankly, alcohol production in the U.S. is still heavily regulated. There are even state regulations in tact since the end of prohibition that stifle the growth of craft breweries (three-tier distribution, franchise laws, etc.). These aren’t even the Feds! The Feds are actually much more lenient on breweries than most states (even on tax rates). Furthermore, today’s craft beer industry is a product of relaxed laws in some states and a growing demand for beer variety (just to name a few…I could do an hour lecture on just that subject). Please do some research before getting people all riled up…

Laissez Faire Capitalism
What are your thoughts on this article? http://www.theatlantic.com/…/jimmy-carter-not…/61599/

Jon Humerick
To claim legalizing home brewing in the 70’s is true deregulation that led to today’s craft beer industry is incredibly ignorant. Again, I could lecture and/or write pages and pages destroying the claim. But alas, this is Facebook. Craft brewing did take off in the 80s, and the majority of those Brewers probably started brewing at home. But similar to the baking analogy provided by the author, only those Brewers with enough cash and resources maintained market share. We in the industry like to refer to it as the “Shakeout.” Hundreds of breweries closed or were consolidated and incorporated into the larger brewing conglomerates. Why? Because of strict regulations at the state level. Remember when I mentioned three-tier distribution and franchise laws? “Craft” Brewers were stuck selling to wholesale at horrible margins to compete with the macrobrewers, and if their wholesaler didn’t want to move the beer, the craft brewer was stuck. These are the same regulations that exist today in a lot of states. Why were brewpubs successful? Having a restaurant included meant selling the beer on site (really really really really high margins). Today’s craft beer industry can largely be attributed to tasting room laws that vary from state to state. Some states still don’t allow beer to be sold on site at the brewery. Tasting room laws are 100% state driven, and that’s why you see nano-breweries (glorified home-Brewers) able to operated in a crowded market, high margins in the tasting room. Again, today’s industry is still very heavily regulated. The government – both federal and state – plays a large part in alcohol manufacturing and distribution. To claim the industry is “deregulated” and to claim that deregulation came in the 70s because home brewing became legal is kind of like going to a craft brewery and saying your favorite craft beer is Blue Moon…

Jon Humerick
Right. But the deregulation of home brewing isn’t the same as deregulating the beer industry. The deregulation of an amateur hobby in the 70s had nothing to do with today’s beer industry. There were still barriers to entry because of decades old state regulations, lack of information and knowledge on commercial brewing, and lack of information, knowledge and availability for home brewing even. I won’t even bring up the fact that there weren’t literally dozens of equipment manufacturers for small breweries like there are today. It would take decades before some of the most famous home brewers turned craft beer godfather, like Ken Grossman, Tony Magee, or Jim Koch, would even have access to a home brew store to buy ingredients…I’m simply arguing that today’s craft beer industry is a result of a lot of different factors. Legalizing home brewing is so far removed that posting a meme saying “deregulation” created craft beer is simply an overreaching conclusion that doesn’t take history into account. It’s also a gross misrepresentation of deregulation itself, considering the original post was ultimately referring to the deregulation of an amateur hobby and not the commercial industry to which it was referring. Again, home brewing is NOT commercial brewing, and quite frankly, the majority of home brewers turning “commercial” shouldn’t be doing so because they have no knowledge of the industry and what they’re getting into. They’re actually hurting the industry. So, if you say home brewing deregulation affects the beer industry, I would argue that deregulation is actually very bad for the industry.

Avery Day
you said “The craft beer industry is not a result of deregulation, and quite frankly, alcohol production in the U.S. is still heavily regulated.”

Literally ending prohibition in the 30’s was deregulation, and so was every law passed since then that is in favor of brewing beer, closet brewers and big operations alike. Your lack of understanding the word deregulation was clearly reflected in that sentence.