First, go join http://www.reddit.com/r/cryptocurrency. The reddit /bitcoin community has long been my home, but since I’ve become convinced that LTC is a winner, I have realized that the bitcoin community is too narrow minded for a real crypto-currency discussion. I like /litecoin as well, but I am worried they will develope a similar closed-mindedness down the road. For now they are very cool and open-minded though. /Bitcoin does not want to talk about any alternative currencies and that is bad for the market as a whole. Bitcoin is cool. It’s not the only thing that’s cool. If we want progress we need a more open discussion.

Second, LTC has begun appreciating as anticipated. Two main exchanges for LTC are Vircurex and BTC-E. As of this writing on April 28 the exchanges show market rates of .031255 and .03195 BTC/LTC, respectively. In my last post, only 2 days ago, Vircurex was showing .027. A day before that Vircurex was showing .022. It’s happening. Litecoin is growing. There is a significant amount of volatility as should be expected, but nontheless we are seeing a steady climb on the average price.

Third I have run into three good pieces of information on why litecoin itself is valuable. I would like to answer the one good objection to litecoin’s value that I heard (it would be good if it was true, that is). Many people told me that you can’t spend litecoin for real goods or services. All the advantages of litecoin, then, would be rendered meaningless as you would have to exchange to fiat or BTC to actually transact. This statement is false and as evidence I will reference this list of litecoin services including clothes, jewelry, hosting services, coding services, marketing services, gambling, investment and others.

The second good piece is a forum post by user CoinHoarder on bitcointalk.org. A conversation was started by someone objecting to bitcoin and I think CoinHoarder did a great concise job of summarizing many good reasons to support litecoin. The 13 points he presents are shown below (follow the links for a zoomed in version): 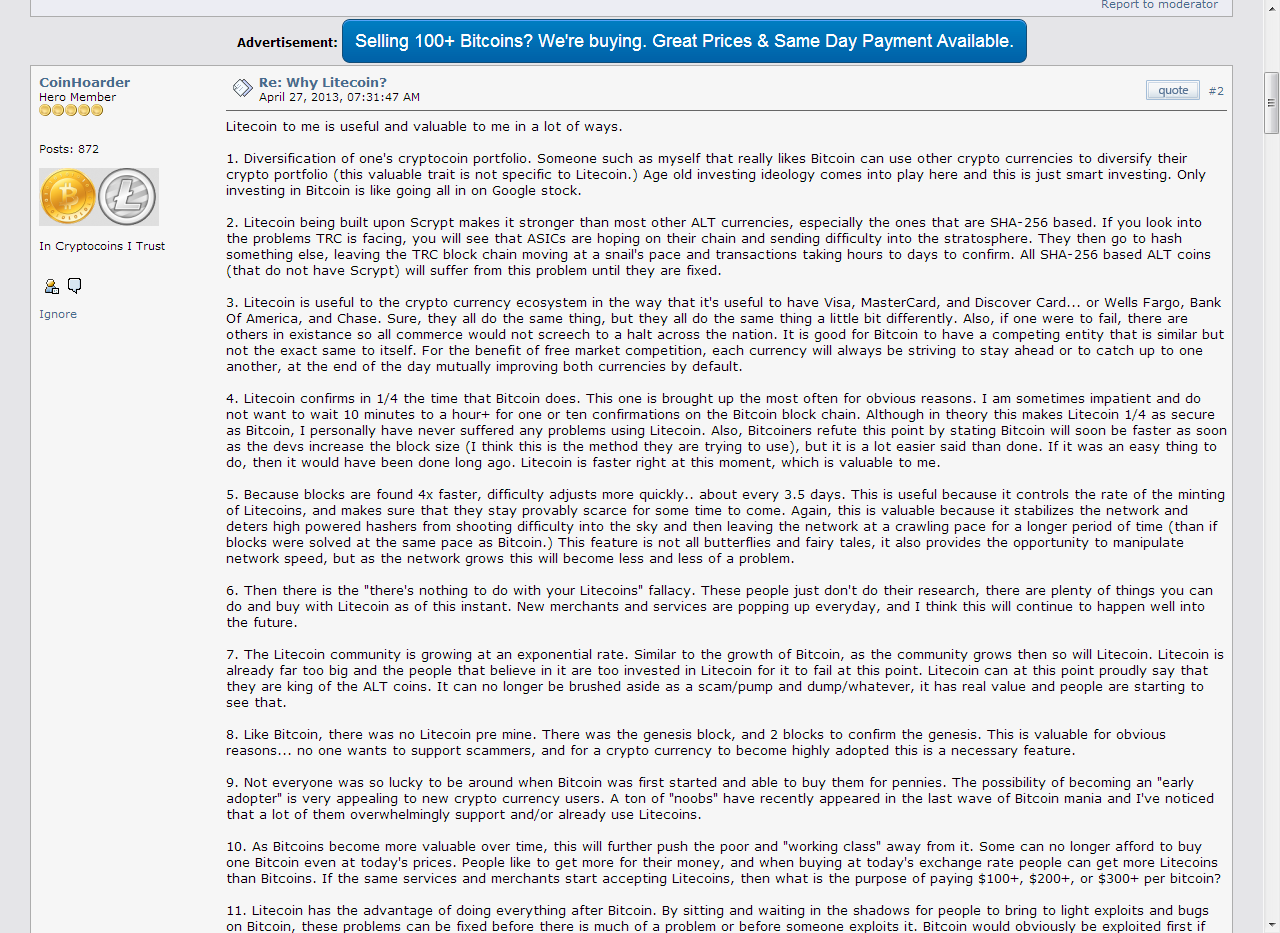 The third good piece of information is a recent litecoin security analysis. Can you believe that litecoin could actually be more secure than bitcoin? It was an amazing and unexpected read for me which only increased my perceived value of LTC.

Here is a 4 week old (in cryptoworld that means slightly dated) video of a guy going over some of the basic differences, once again, between LTC and BTC:

Lastly, I authored a bet based on my prediction! Visit here to bet that litecoin will exceed, or not .15BTC/LTC by August 31! Put your money where your mouth is and at the same time get a picture of the general population’s view!