This article covers 4 short notes I would like to make regarding economic inequality.

That article demonstrates that the rich are getting richer. Four years ago, the combined wealth of the 388 wealthiest people equaled the combined wealth of the 50% of the world’s least wealthy. Today, the top 88 billionaires match the world’s poor, and I predict that this trend will continue such that fewer billionaires will match more poor in the future.

Note that the article does not demonstrate that the poor are getting poorer, other than in a relative sense. It’s also important to note that the measures of wealth calculated are on private wealth, or the value of privately held property. A person’s total wealth includes their access to public goods. This is going to be a critical point in a minute.

Even if the poor don’t actually get poorer via declining wealth, income, and so on, they may still be said to be less equal due to the widening inequality gap which comes from income stagnation of low earners combined with rapid income or wealth, two different concepts by the way, growth. 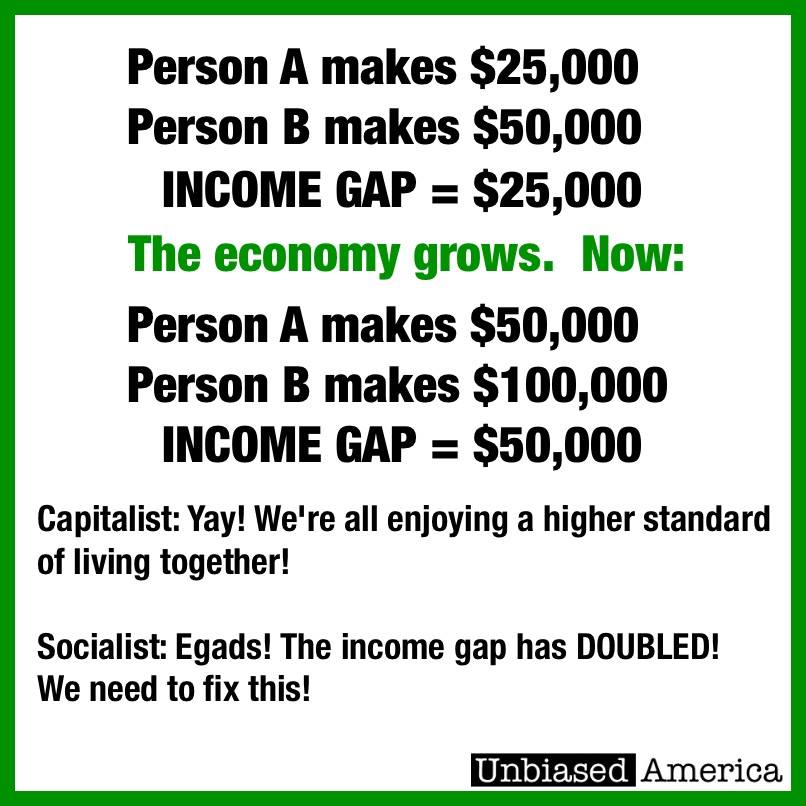 3 – It Kind of Isn’t Happening

There is an important difference between private wealth and total wealth. Total wealth includes access to public goods and things such as social capital or human capital. A public good doesn’t mean something the government makes, it means a good which is accessible to the public.

One important example of a public good is access to information or a decent education. Information and education in turn represent human capital. If you learn something new you improve your human capital. Social capital means the quality and frequency of your interactions with others. If everyone likes you and talks to you all the time you have high social capital. If no one knows you, or everyone knows you and they all don’t like you, you have low social capital.

Because of technological advancements, the ordinary or poor person have relatively higher access to better education and social networks which were once the purview only of the elite. Open source software is a great example of something that is very valuable, but it belongs to everyone so it is public wealth not private wealth.

Long story short, I think that once public wealth is included in a person’s total wealth we see that total wealth is growing even faster for poor people than for rich people.

4 – Economic mobility is important too

The last thing I would note is that the media often talks about poor people and rich people as if they are actually the same people over time. The truth is that richness as a class and poverty as a class are relatively stable, but actual people are moving up and down those classes all of the time.

This is where turnover rates come in. Just like there is a turnover rate for employment, a turnover rate for income class can be considered. Turnover rate describes the rate of people leaving a particular status over a particular period of time. In employment this indicates things like how long people hold jobs, how long it takes them to find new jobs, and so on. Regarding income class this would indicate things like how long a person stays in a particular income class. The point is that you may be poor today and rich tomorrow. This is called economic mobility, and it is a much more important consideration in the strength of an economy and in an individual’s ability to achieve success imho.

1 thought on “4 Points on Economic Inequality”